It’s been quite a few months since I received my Imperial back from Mike Johnson. He did a fair bit of restoration and modification on it and it’s now a fantastic instrument. Here’s a run down of the things that happened in the workshop: 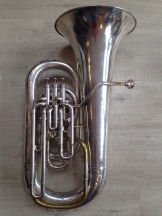 As with any new or different instrument it’s taken me a while to learn it’s individual playing characteristics and quirks, but I think I’m starting to get a handle on it!

In general the Imperial has more character to the sound right across it’s range compared with my Sovereign. It also seems to take less effort to play and at first I was quite surprised how much power in the sound I seemed to be producing with relatively little effort, especially in the mid register. The 4th valve register is nice and punchy and easy to play in. To centre a long, loud low F and E I’ve found I need to focus the airflow slightly more downwards than I’m used to, I’ve no idea why but apart from that the low register just plays itself! In short this instrument makes the grunty, fat and fruity sound I’ve been looking for.

Mike’s craftsmanship is second to none. Where he places the forth valve lever means you can also operate a tuning trigger for the first valve which helps tweak any intonation issues, allowing you to get some extra tube length for low F and E is you need to settle them. All the soldering feels really solid and instrument feels ‘air tight’!

In short I love it. Video review to follow……..

Finally a quick word about why I’ve come to get this instrument. In 2011 my younger brother, Graham Fox tragically died. He was an extremely talented drummer (Google him) and collector of drum gear. After he passed away I inherited 4 kits, 10 snares, 40+ cymbals and whole load of other percussive toys.

Rather than keep all this and have it collect dust and take up a whole room of its own I decided to sell most of it and buy a memorial tuba in its place. It seems fitting that I have found a 40 year old tuba as a memorial for my dear brother who loved vintage drums.

I’ve just sent my 15″ Imperial EEb off to Mike Johnson for it’s surgery. Whilst in the operating theatre it will have the following:

Here are the before pictures – I’m looking forward to showing the after pictures.

Big thanks to Andy Kershaw for taking it up to Mike’s for me. 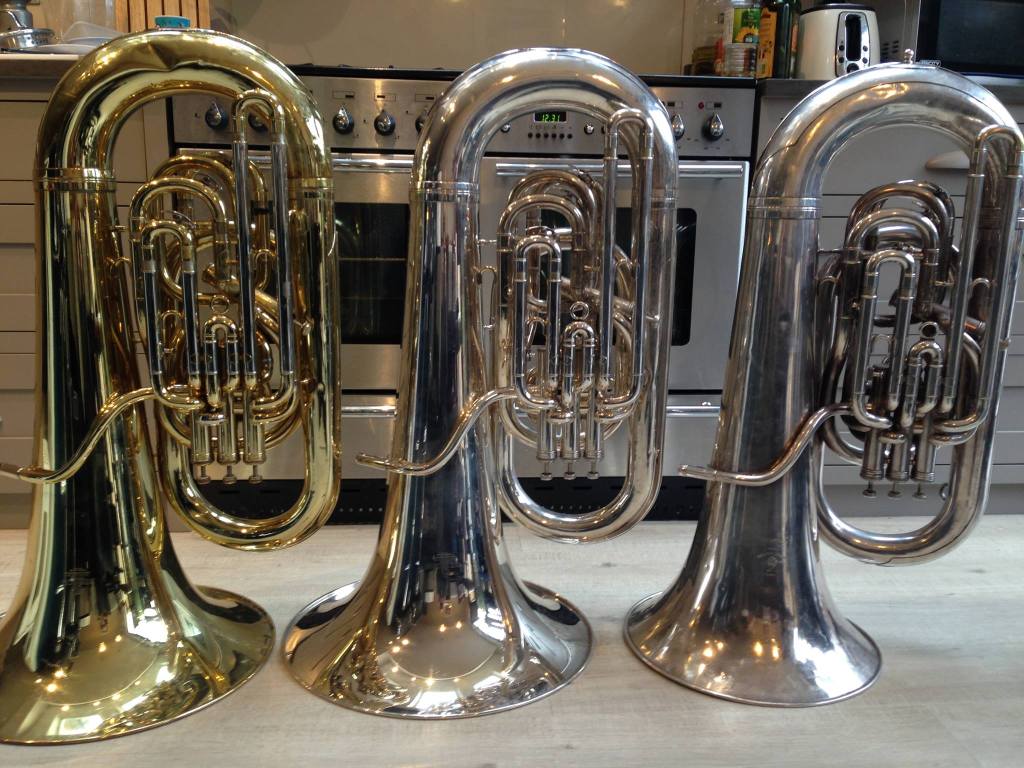 For the last 25 years I’ve played exclusively on a Besson 982 EEb Sovereign in silver plate made in 1992 (middle of the picture). It has served me well! It’s always been a bit flat in the top register (which I can work round things with alternate fingerings) but apart from that it does what I need it to do.

However, more recently I’ve been looking to find the mythical ‘perfect tuba’. I have a sound in my head and I want to find something that makes that sound. I think the best way to describe what I’m looking for is something that makes a noise like a funky version of a Merlin engine that powers a Spitfire. Something with grunt, bite and character.

In my quest I have tried all sorts:

(Is anyone still reading this?!?!?)
I started to come to the conclusion that the tuba I had was probably my ideal tuba as I couldn’t find anything that played any better!

At the same time I have been thinking about getting a 4th valve conversion and changing it to a rotary valve. My old teacher Oren Marshall had had this done on a Sovereign and he said that it really opened up the low register, which is something that appeals to me as I spend a lot of time playing low bass lines. Having realised that I already own a great tuba I was reluctant to contemplate chopping it up, just in case things didn’t go to plan so I started looking for a 982 Sovereign that was a similar age to mine so I could do the 4th valve conversion on that. After a bit of a search online I found a 982 for sale which just happened to be in the possession of a certain Mike Johnson (he’s the guy who does the 4th valve conversions), small world! I went to give it a blow and really liked it so bought it (it’s the one pictured on the left of the picture). It has a bit more core to it’s sound and plays better in tune in the high register compared to my original 982, although it isn’t quite as open in the low register. However, just as I’m all set to book this instrument to have a new 4th valve Mike asks if I’ve every played a 15″ bell Imperial, he reckoned it’d be just up my street.
Hmm, what to do!?! I’ve just found a great tuba and the man who’s sold it to me and seems to know more about tuba design than Steve Jobs knew about tech design has just told me to try something else. He wasn’t the first person to suggest an Imperial but I’d almost dismissed them as that’s what I played as a kid until I graduated onto a Sovereign! Anyway, I contacted a few local brass bands to see if anyone had one lying unused in a cupboard and sure enough Farnham Brass Band did and they actually were looking to sell it. I go and try it out and instantly fall in love with it (it’s the one on the right of the picture). What a noise! I think I have finally found the musical Spitfire that I’ve been looking for for the last 6 years, and it’s over 40 years old, and cost me less than quarter of the price of any new instrument that I’ve looked at. The only problem is it’s a ‘low pitch’ instrument i.e. plays flat and has a small mouthpiece receiver so it needs a bit of tinkering with so that I can play it in anger. No problem says Mike! I’m now just waiting for a slot in his workshop schedule.
To be continued……..